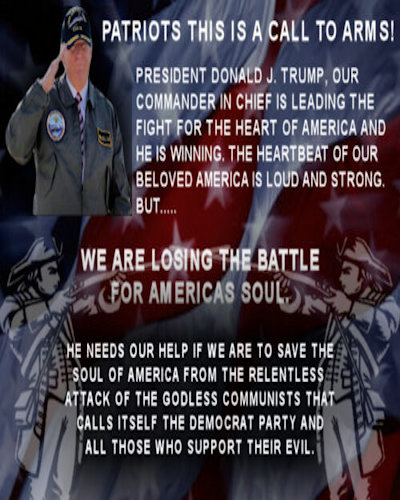 The movement to de-legitimize, undermine and eventually impeach President Donald Trump is far-reaching into every department of the federal government. It is supported by the DNC, a group of GOP leaders that are anti-Trump, main stream media and various 501c PACs funded by globalist donors.

President Trump scares the hell out of these people for a variety of reasons. His agenda of “America First” is everything his enemies hate. These groups invested untold millions of dollars into getting Hillary Clinton elected president. They are having fits over the fact it didn’t work. They refuse to admit they had a grossly flawed candidate and a lack of a message the people in America could rally around.

They will stoop to the lowest tactics in an attempt to hurt the Presidency of Donald Trump. There is no bottom to this. They will lie, invent fake news, misquote the words of the President, fund anarchy in our streets and are willing to get America into World War 3 or start a civil war if that’s what it takes to bring down this President.

Make no mistake about it, the DNC and globalist controlled main stream media started the demonization of Donald Trump as soon as he announced his candidacy for president. As he moved into the lead, vanquishing one GOP stalwart after another the attacks took on a new level. They began to attack his supporters to portray them as uneducated, racist, bigots and predominantly white. Project Veritas has video evidence of the collusion between the DNC and the PACs coordinating violence at Trump rallies.

The main stream media went out of its way to report fake news, edit audio, Photoshop images and take words out of context in to further their agenda of electing Hillary Clinton at all cost. Journalist were no longer journalist. They became obviously biased talking heads reporting their opinions as the news.

They totally ignored the mountain of evidence pointing to the massive criminality of Hillary Clinton, her staff and the DNC. Hundreds of emails (unchallenged in their authenticity) showing the nefarious actions to steal the nomination from Bernie Sanders went ignored. No outrage what so ever at the DNC Chair having to resign only to be hired by the Clinton campaign. A mention in passing of a CNN/DNC operative passing debate questions to Hillary Clinton before the debate with nobody being fired.

Every day we heard how Trump couldn’t get enough of the Women’s vote, the Hispanic vote or the Black vote to get elected. HE HAS NO PATH TO 270! How many times did we hear that from the media? Trump is President precisely because the main stream media was proven to be liar, cheaters and in many cases so obviously biased they cried when Trump won. It is out of this bias that the country has now sunk to the level of Anarchist running through our cities under the guise of free speech rioting, burning and physically attack citizens just for wearing a Trump hat.

And what does the main stream media do? They report it as a protest for free speech. They blame it on Trumps actions as President (keeping his campaign promises) and they parse his every word in the worst way they possibly can. Universities that used to be the bastion of free speech are now actively supporting these anarchists by refusing to protect the free speech of conservative students and speakers.

So where does that leave America today? What are we to do to stem the tide of divisiveness in the country. How are we ever going to return to civility and accept the right of others to have a different opinion. I fear you will not like the answer.

We start by recognizing publicly who is behind this anarchy. Who is funding the anarchist directly. We demand our government to investigate the money behind this and follow the trail where ever it leads.

If the main stream media has been compromised in the slightest by colluding or accepting funds from these people or PACs, they should lose their FCC license and their tax status. Any PAC involved needs to lose its license to operate and its tax-free status. People running these entities need to be charged with sedition, inciting to riot, destruction of private and public property and felony assault if appropriate.

As to immediate action the President needs to let these cities and the law enforcement agencies in the cities to use all necessary force available to stop the rioting and destruction. Peaceful protest is protected in America but the first time an object is thrown at other people, police or property it is no longer a peaceful protest. Law Enforcement must step in at the first sign of trouble in an overwhelming show of force. Tear gas, rubber bullets, water cannons as well as officers with clubs and shields should all be deployed and ready to use.

At no time, should protesters block a road or occupy private property. Any effort to impede the public from going about their lawful business should be immediately stopped by whatever means necessary. Airports, government properties and state parks are not to be used for protesting.

If the state and local governments fail to do their jobs it is imperative the federal government step in and use any means available to them, up to and including the National Guard. Our governments, Federal, State and Local need to act now. To delay only encourages more violence and anarchy in our streets. American patriots are getting tired of these people breaking the law and not being held accountable.

It will not be long before we will do what is necessary to protect ourselves, our property and our rights if our government continues to ignore it. At that point it will be lethal action that is necessary to put a stop to it. When that happens, we will not forget the DNC, GOP leaders that are anti-Trump, main stream media and the 501c PACs funded by globalist donors that started this.

You will find yourselves in the cross-hairs of history as WE THE PEOPLE take back control of America.