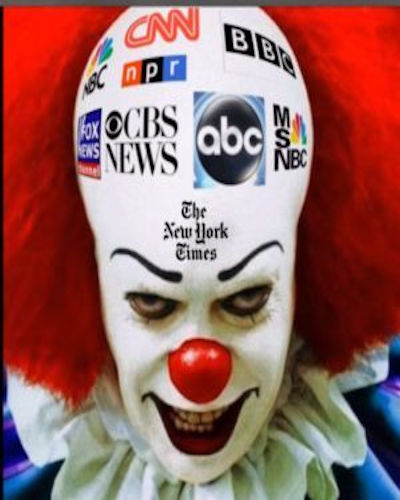 Socialist, Progressives, Liberals, Democrats are just cover names for the Communist Party in America. Our survival as a nation depends on recognizing the Enemy for who they really are and the understanding the role being played by the Main Stream Media in their plan to destroy the America we know and love.

This is my response to the Main Stream Media that is made up of socialist, liberal democrat anti-Americans that are still triggered by the election of Donald Trump as President. The only thing they hate more than reporting the truth, is President Donald Trump because he has exposed them as the Media Arm of the Communist Democratic Party.

GET OVER IT YOU OPINIONATED SNOWFLAKES. Hillary lost! Trump won!

Your party lost because you offered a flawed candidate that lied every time she opened her mouth and most Americans with a brain didn’t trust. After 8 years of a failed Obama administration with no coherent Foreign Policy and a failed economy going nowhere with 90 million Americans out of work HRC offered more of the same. With a war on Law Enforcement and a Justice Department being used to promote Anarchy in our streets for political gain, creating a country divided on racial lines and economic status, HRC offered only more corruption and increasing civil unrest.

We have the DNC that cheated Bernie Sanders out of the nomination, causing the Chairwoman to resign in disgrace only to replace her with a Chairwoman that cheated by giving Hillary Clinton debate questions. Need I really go on. The list of reasons that America rejected your party is long and true.

You totally failed in journalistic integrity by ignoring the corruption at all levels of the DNC and the power brokers in the Democratic party. You push the fake news of a Trump/Russia connection with no documentation to prove it, all the while ignoring the factually documented Russian connection between the Clinton’s, the Clinton Foundation and the Podestas. Where was your outrage when Hillary Clinton as Secretary of State was brokering a deal to sell 20% of our uranium to Russia, putting millions of dollars into the Clinton Foundation and Bill Clinton getting a 500K speakers fee from the Russian bank used in the deal?

Where was your editorial outrage about the Clinton Foundation raping billions of dollars from the Haitians while awarding her brother the rights to mine gold in Haiti? Where was your outrage over President Obama giving Iran 1.5 billion dollars that is being used to fund terrorism against Americans? What part of “Death to America” by the leaders of Iran are you too stupid to understand? You failed to hold Obama accountable for this criminal act?

The American Dream had become the American Nightmare with a government out of control and anarchy erupting in our streets because of President Obama and his criminal administration and policies that were by design, made to destroy America.

You claim Trump is a train wreck when in truth he is a train barreling down the track doing exactly what he promised to do during the campaign. Rolling back regulations, appointing a Constitutionalist Supreme Court Justice, negotiating for jobs, re-negotiating flawed trade agreements, rebuilding our military, building the wall, enforcing the immigration laws. How refreshing to have a President keep his promises after decades of Politicians becoming President with no intention of keeping the promises they made only to gather votes.

You scream about his cabinet being millionaires. How great is it to have an administration that has no need to sell their influence to become rich on the backs of the American people? Our smartest and most successful people that owe nothing to the elites in D.C. and aren’t in the pockets of lobbyist are stepping up to serve our President because of their love for America.

Donald Trump made it feel good to be an American again. He has made it fun to be patriotic. He made loving our flag, respecting our laws and obeying the constitution fashionable. He spoke to us, not at us. While the left was calling us names like deplorable and racist and bigots, Trump was calling us Americans.

The real damage being done to America is by people like you trying to use your influence to stir up anti-American sentiment and to foster sedition in an attempt to overthrow our duly elected President. YOU ARE THE REAL DANGER TO AMERICA and We the People will not forget it.