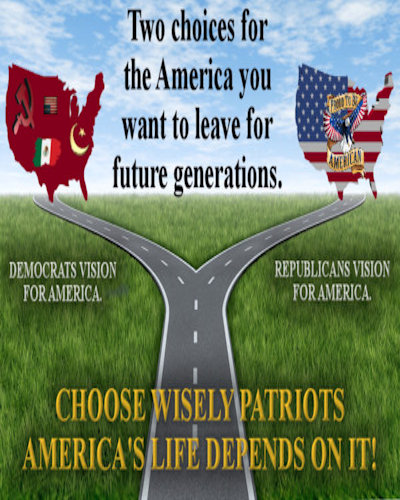 AMERICA IS AT A CROSSROADS right now and which way we turn will determine whether America as we know it will cease to exist or whether America will once again begin to shine that light on the hill that everyone sees and wants to be a part of.

True American Patriots took the first step in securing Americas return to greatness by electing Donald J. Trump as president in 2016 but our work is not done.

Our choice in this election will define what kind of America we will leave for generations to come.

We can TURN LEFT again as we did in 2008 and watch as America is destroyed from within by the socialist liberal left PC group made up of radicals that are left over from the 60s and the 2 generations of Americans that have been indoctrinated in our schools (not educated) to believe that America is the problem in this world and only by destroying our Constitutional Republic and replacing it with Socialism and eventually Communism.(a system that has failed all over the world) will America be saved from itself.

They will pit brother against brother, race against race, rich against poor, Christians against non believers until America withers away in social and moral decline and descends in to chaos and inevitably Anarchy.

Or we can TURN RIGHT once again as we did in 2016 and continue to embrace our destiny to help President Trump “Make America Great Again”.

We need to continue the revitalization of our economy and the security of Americas sovereignty and protecting its borders. We need to support our President that for all his bombast and ego is a great businessman. America is the worlds largest business and we wanted a business man in charge of it.

We needed someone who can sit across the table from Wall Street Bankers, Heads of State and power brokers around the world and make deals that are good for American workers not greedy politicians.

We wanted a President that is not afraid to call a spade a spade. No more PC in the White House. No more social experiments with our military. No more foreign policy that leads from behind. No more divisive speech that tears the heart out of Americans of every color and class.

We have Donald Trump to speak for us now and we can get America Great Again. Trump has our economy back on track and that alone will solve so many social ills in America because the American Dream will once again be sought by and available to everybody.

They called the warriors of WW2 the greatest generation. I think if we act now and restore America so that our friends love us, our enemies fear us and our people are proud to be called Americans then we will be considered the greatest generation because we took that RIGHT TURN at this moment in history and changed America and the world for the better.

If you aren’t motivated to get out and vote for conservatives when there is so much on the line then you are failing to do your duty as an American.

WAKE UP PEOPLE … We need to TURN RIGHT AGAIN NOW.