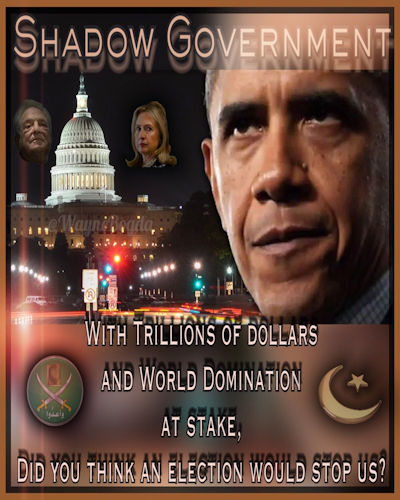 The frightening answer is YES, WITHOUT A DOUBT.

November 8th, 2016 was a horrifying day for Democrats. They put all their money on Hillary Clinton. A candidate with so much foul baggage she needed a giant dumpster to try to hide it in. Yet they still believed the American people were gullible enough to elect Hillary Clinton.

I believe that God recognized Americas need for a reboot to bring it back to its former greatness and spoke to the heart of Donald Trump and said “It is your Time” and Donald Trump heeded the call to lead America back to its role as the Greatest Country in the World.

Unfortunate for the Democrats, but fortunate for America over 63 million proud Deplorable Patriots showed up and voted for American Warrior Donald J. Trump as the 45th President of the United States.

OMG, Their worst nightmare had come true. America had chosen an outsider over years of Republican and Democrat corruption. Their hold on power and their corrupt cash machine were suddenly in danger like never before in history.

They couldn’t control this President. He had no political baggage. He didn’t need their money. He was saying dangerous things like “MAKE AMERICA GREAT AGAIN”, “DRAIN THE SWAMP”. Chants of “LOCK HER UP” reverberated through packed arenas all over America filled with “Deplorable’s” who wore the title proudly.

However the Democrats were not going to go quietly. Their thirst for power and money is insatiable. If they couldn’t win the election they would hatch a plan to steal the Presidency.

AND SO THE QUIET COUP d’ETAT BEGAN IN EARNEST.

Inside our own DOJ, FBI and Intelligence communities a plan was formulating to do what ever it took regardless of how many laws were broken or lies needed to be told. They were going to “GET TRUMP”

They leaked lies to a complicit Media that had also invested all of their credibility in getting Hillary Clinton elected with bogus polls and softball interviews designed to fool the America Electorate into voting for their darling Hillary. So naturally they would be a willing partner in the Coup.

Their arrogance in believing Hillary Clinton couldn’t possibly lose would prove to be their downfall because they didn’t even try to hide the cheating, lying and corruption during the campaign. Their plan started to unravel when the American Citizens began to see the corruption of Hillary Clinton and the DNC when they stole the nomination from Bernie Sanders.

Once citizens became aware of this corruption because of the power of social media, Wikileaks and citizen journalist that risked everything to bring the truth to light. Some patriots like Seth Rich were murdered for exposing the corruption. Even murder was in their playbook. They were playing for keeps.

Now after 2 years President Trump is already is winning on so many fronts it is hard to keep up with him. Promises made promises kept. What a wonderful thing it is to have a President in the White House that keeps his word.

Now we have a true warrior for truth and justice in A.G. William Barr and the Rats are starting to eat their own so I am no longer worried about the Coup because the Deep State has been exposed and will soon be fired, arrested or in jail. Hopefully all three.

In front of God and country their evil is being exposed by our President and a few Republicans that seem to have found their backbone and gave the Democrats all the rope they needed to hang themselves in a very public way.

Because real American citizens that still believe in fundamental fairness and our countries long-standing belief that you are innocent until proven guilty have seen the worm has turned and honest Americans from all over the political spectrum are creating a RED WAVE unlike never before seen in American Politics.

Defeating the Democrats in the 2020 election will be the final nail in their coffin. They will implode very publicly blaming each other for the loss and we get to sit back gloating, yes I mean gloating as we watch it happen.

DECISIVE ACTION IS NECESSARY IF WE ARE TO DEFEAT THIS EVIL AT THE BALLOT BOX ONCE AND FOR ALL.

All 63 million of us must vote and bring friends. The victory needs to be so overwhelming that even the cheating we know will take place by the Democrats will have no effect. We can do this if you are willing to accept the #get3 Challenge. Watch this short video and accept the challenge.

They say the Americans that won World War II were the greatest generation. I say if we win the mid-terms preserving or adding to our majorities, our generation can also make that claim because along with President Trump we will have truly saved America.

NOW IS THE TIME TO PROVE WWG1WGA.