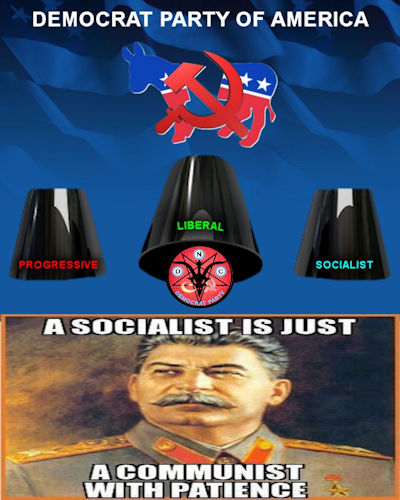 Don’t Take Your Eye Off The Ball.

The citizens of America have a clear choice ahead of them. We have a 2-party system in America, but it is not Republican vs Democrats, it is Constitutional Conservatism vs Communism, it is Good vs Evil. Choose wisely which one you want your children to live under.

It is time for an honest discussion about the motives of the Democratic Party in America. The Democratic Party has been taken over by devout and committed Communists. Their only agenda is to destroy America by any means necessary. We must recognize this and openly call them what they truly are.

They are COMMUNIST, Over the last 50 years they have changed their name but they are not liberals, not progressives, not far left, not socialist but outright COMMUNIST and it is COMMUNISM they seek for America.

This is not a war on Donald Trump. That is only a distraction, a feint for Americans on both sides of the political spectrum to fall into their trap of causing division among our citizens. The real object of these Communist is to completely undermine the Constitution and the Bill of Rights. To get the citizens of America to believe that these founding documents are no longer relevant in today’s world and destroy the American Dream.

It started over 60 years ago when our Universities began hiring left leaning Professors under the benign name of liberals. Liberal was not a threatening word. Just a nice way of saying we care more than others about the perceived injustices in America. In reality these people were socialist at best, closet communists at worst. They began indoctrinating their students who then graduated and became teachers in our secondary school system. Eventually reaching down into the elementary system where they could start their indoctrination at the earliest of ages.

One of their first truly evil moves was to attack our Christian based morality. Their goal was to remove God and the teachings of the 10 commandments from the schools and replace it with socialist liberal teachings that if it feels good it is OK regardless of how deviant the act. They convinced our children that it was OK to be mediocre, that striving to excel somehow was wrong because it may hurt the feeling of those less smart or less athletic. And the parents fell for it because it was easier to accept it than to question those in authority that controlled it.

The Democrats in control of our National government, State governments and major cities worked together to create a sub-class of American citizens completely devoid of morals and totally dependent on the government for the basics in life. They didn’t get a shot at the American Dream, they were force fed the American Nightmare and convinced they had no other choice but to choke on it. This allowed them to be easily led to the government tit with a belief that if they kept voting for the very people that put them there that somehow it would get better.

We are seeing their plan being unveiled right now in Washington, in major cities across America and in communities in our heartland. Our Federal Government has yet to fully address the threat of the Anarchist and Seditionist that seek to destroy America. It disturbs me to no end that our Government officials’, including the President, hasn’t issued an order to remove the Anarchist from our country. CAIR, INSA, Muslim Brotherhood, ANTIFA, BLACK LIVES MATTER, BAMN, Black Panthers, KKK and White Supremacist groups that openly call for death to Americans, killing our Law Enforcement Officers and assassination of our President are domestic terrorist. They openly attack any citizen they feel do not agree with their perverted ideology with deadly weapons and the local government officials refuse to allow Law Enforcement Officers to do their job. They are being funded by seditionist both foreign and domestic and they operate openly under the protection of the Media and their Comrades in the government.

You must understand this is not an overnight happening. This has been planned for years and they have been placing their people in power positions at every level of government from local school boards to the White House. We have career politicians that no longer serve the citizens that elected them. This is in both parties with the Democrats in control at local levels to Republicans that no longer try to serve their constituents but openly defy the will of the people by publicly attacking and working against the President we elected. These people are not Americans; they have been perverted and co-opted by either greed or actual belief in the Communist ideology and work openly now to subvert our country and bring about the death of the dream called America. They are traitors to the oath they took to serve the Americans that elected them. They are attacking the very history that made America great and are using their so called moral outrage to create social division at every level of our society.

Their plan of divide and conquer from within is being promoted by the American Media that is owned by globalist that want nothing more than to see America fall into chaos so they can swoop in and take total control of our natural resources, our factories and our workers. We must recognize this and openly call them what they truly are. They are COMMUNIST, not liberals, not progressives, not far left, not socialist but outright COMMUNIST and it is COMMUNISM they seek for America and we must not falter in the war ahead of us.

WE MUST BE ORGANIZED, WE MUST BE STRONG, WE MUST STAND WITH PRESIDENT TRUMP AND WE MUST BE ARMED AND READY TO DEFEND AMERICA WITH PATRIOTS BLOOD IF NEEDED.